Nissan Cefiro A31 Tuning Guide based on an article which appeared in Banzai Magazine in 2006 which was written by Rich McDowell.

The First Generation Nissan Cefiro, chassis code A31, was built from 1988-1993. The car was aimed at the executive end of the market and competed with small to medium sized luxury cars from Europe. The beauty of this car is that it is based upon the Nissan Skyline R32 Platform, which in turn shares parts with the Nissan S13, which means that this car has a host of performance parts available for it.

The Nissan Cefiro was offered with a 2 Litre 2.0, Normally Aspirated (N/A) powerplant as well as the RB20DET which puts out 220bhp as standard and is a detuned version of the straight six found in the R32 GTS-T from the same era. This means that uprated parts for the RB20 are readily available.

A common stage one upgrade for the Cefiro is to fit a larger turbo charger, followed by a front mounted intercooler, performance chip and exhaust system. These basic modifications can take the output of the RB20 up to 300bhp at the rear wheels. However 300bhp is starting to push the limits of the standard engine.

A popular choice of engine for a swap is the Nissan RB25DET, this is easily capable of taking power over 300bhp but if your looking for 400bhp plus then the ultimate choice is the RB26DET engine. These Nissan AWD GT-R engines will entail some extra mechanical work to make them fit in the RWD chassis of the Cefiro. This entails grinding of the front differential and adding a custom sump. Along with some possible engine mount modifications and the normal wiring loom, power steering and plumbing issues usually associated with engine swaps the transplant can be achieved.

If this sounds like to big a job then another popular conversion uses the SR20DET motor. The SR20DE is not only lighter than the RB20DET but it also improves handling as the motor can be mounted further back in the chassis. The SR20DET is capable of being built to produce 300bhp all day long and turns the Cefiro into a lightweight missile. 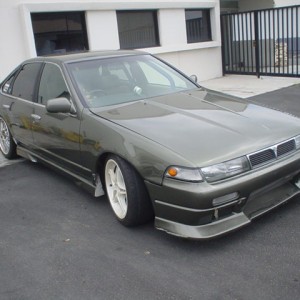 As the Nissan Cefiro usually came with an automatic gearbox, changing this is a priority to extract maximum performance. There are many options from the RB series which should require minimal engineering to fit the Cefiro, although the use of a speedo converter may need to be used as all Nissan Cefiros use a cable speedo drive.

For Australian enthusiasts, the VL Turbo Commodore gearbox may be worth a look as it is almost identical to some of the Skyline gearboxes. The R200/R180 diffs can also be interchanged to alter the gearing.looking

The Cefiro is no looker but it is by no means the ugliest car ever produced with the interior looking particularly dated now, but if you can get pass this it is a well equipped  saloon with electric everything, such as seats, mirrors, windows and cruise control. The upgrade options listed here are by no means cover everything, a little looking around should turn up many more possibilities. 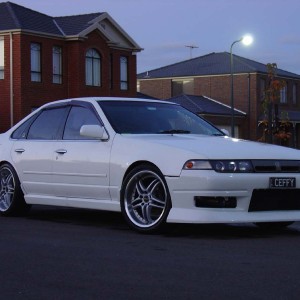 Considering the cost of these cars and their modding potential they are very attractive if your looking a racer/drifter on a budget. To find the latest prices for the Nissan Cefiro, the Japanese Car importers on StrikeEngine should be able to give you an idea of how much it will cost to import and register a Nissan Cefiro in the UK.

4 thoughts on “Nissan Cefiro A31 Tuning”