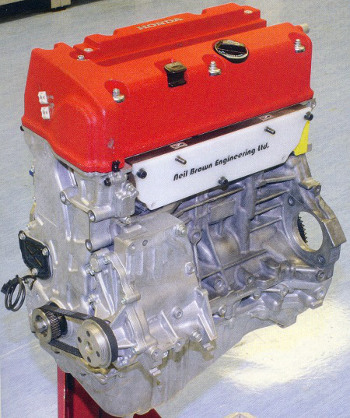 The Honda K20 power plant has won back to back drivers championships in the British Touring Car Championship (BTCC). Racecar Engineering magazine spoke to Neil Brown of Neil Brown engineering to find out his K20 engine tuning secrets and what it takes to make power from the Honda K20 / K Series engine.

Who are Neil Brown Engineering?

Neil Brown Engineering is heavily involved in Formula 3 with Honda and in the DTM with Audi.

K20 engine tuning is not Neil Browns first foray into the BTCC they also developed and maintained the B20 unit when the Honda Accord was in action in the BTCC. Times where different in the B20 era as Honda Japan funded the development of the engine and as such the budget was much larger.

The Original Honda BTCC Engine – The B20

During the Accord era the was a lot more freedom with regards to the things that could be done to the engine which led these motors becoming more and more detached from their road going equivalents. As an example the B20 unit ran with 35mm con-rod journals which is small. The target power output for the B20 was 330hp which is impressive considering the 8500rpm rev limit imposed by the rules.

However Neil Browns philosophy isn’t getting the highest peak horsepower it’s focused towards torque. On the B20 motor the figure was approximately 189.9lb/ft or 260NM.

The engine is based on a K20A2 I-VTEC unit found in the Integra Type-R and the Civic Type-R. In the modern era dry sumps were prohibited and minimum weights were imposed on major engine parts such as con-rods, pistons and the crankshafts

NBE discovered early in the development of the K-Series that the K20A2 was as good a base unit as the B20 it was taking over from. The main areas were the K20 engine is lacking is in the cylinder head. The port sizes could be better, the exhaust port shape isn’t ideal as they are different sizes, the centre ports are different from the outer ports. To attempt to overcome this problem the ports are lightly machined which means only a very small amount of material is actually removed.

The valve sizes are ideal for the current BTCC regulations but they are opened in a different way. This is partly due to the fact that variable valve timing is banned in the BTCC and the fact that the engine runs incredibly aggressive camshafts, in fact the cams use a negative radius because the engine uses a roller follower design. The disadvantage of the weight of the valve train is offset by the fact that you can get away with such aggressive cams.

The BTCC K20 unit runs with Omega pistons, Arrow forged con-rods and a mixture of manufacturers for the bottom end.

Running with a wet sump caused a few headaches. The biggest issue was ensuring that the engine oil returned down the chain drive into the sump during hard cornering even when the oil surge was in that direction.

To overcome this problem an Accusump unit is used and this helps greatly although its not perfect.

Individual throttle bodies were banned for the K20 engine although this has not been as big a handicap as anticipated. NBE also designed and fabricated their own airbox for the K20 which picks up some high pressure air from the front of the car. The BTCC runs a mandatory ECU for the engine tuning on all cars.

The production rockers limited the car to 8500rpm so NBE switched to lighter steel units and this allows revs to reach 9500-10,000rpm on downshifts.